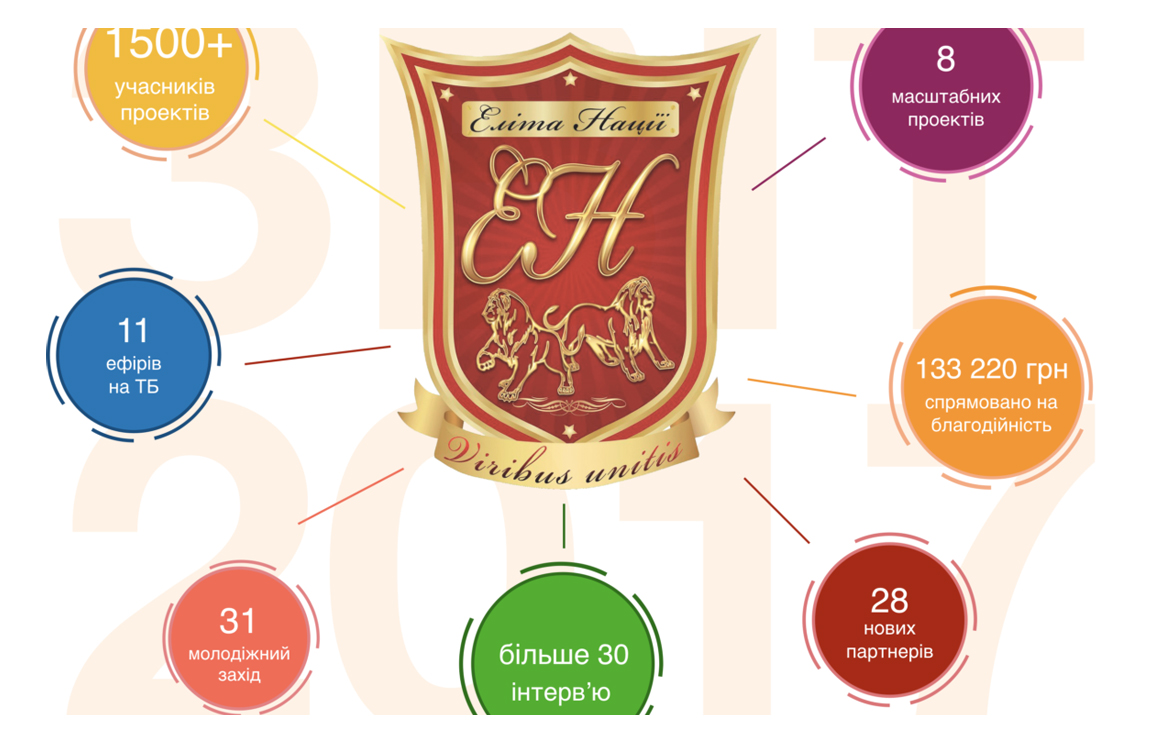 2017 year was so productive and fruitful for the non-governmental organization All-Ukrainian Student Fraternity The Elite of the Nation that we did not even notice the fleetingness of time.

First, there were Police Cadets’. They started in 2016. We conducted excursions for young participants. During those excursions they could see the prosecutor’s office, regional state administration, penitentiary service, etc. In April, we graduated 54 future law enforcement officers and we hope that the participation in the project became an important part of them in developing their personalities.

The same project started in April of the same year. This project is called The School of a Young Writer. It was a very interesting experience not only for the participants but also for us, because Serhii Zhadan, a famous Ukrainian writer, singer and public figure took care of the project. The joint work of us, as organizers, and the participants, as young prose writers and poets, resulted into the collection called Children of a Meteorite. We would love to thank our partners, namely, the Kharkiv Regional State Administration, the Kharkiv Regional Youth Center and the Kharkiv Literary Museum for making it possible.

And in May, we presented the second season of the School of Leadership of the Kharkiv Regional State Administration. It was a significant event for active youth of Kharkiv region. Under its roof, Radmir Expohol gathered nearly 500 people, including students, working youth, young public figures and all those who take care of the youth policy of the Kharkiv region. During the summer, a series of interesting lectures were held. They were carried out by the representatives of state and local self-government and business sector, including business coaches and trainers. And recently, Julia Svitlychna carried out a meeting with the best 40 participants. They already successfully undergo internships at the Departments and Offices of the Kharkiv Regional State Administration.

In addition, we conducted The School of Public Administration. It is a very interesting project. During the project, its participants mastered practical skills in project management, which are relevant for the state, public and commercial activities. The experts of the project were leading specialists of the Department of State Administration, Public Administration and Regional Economics of Kharkiv National Economic University named after Simon Kuznets. It is worth mentioning that these leading specialists have many years of theoretical and practical experience in project management, writing grant applications and implementing projects.

We offered stidents of philological faculties to spend the summer in an interesting and unusual way. So, instead of on-the-job training, they had a possibility to participate in MEDIA SCHOOL, a school of a young journalist. There were excursions, master classes and a practical part which included writing articles for a youth portal. They had an opportunity to feel like they were professional journalists.

We also offered students of schools to spend summer holidays productively together with our English courses SMART OWL. The classes were held by the representatives of the FLEX exchange program of the American Council of International Education.

In September, we started to prepare for the most difficult, and at the same time, the most important project of ours, the Charity Ball. During the evening, the audience enjoyed an incredible theatrical and dance performance by the All Stars dance studio. The charity auction was split into three parts, and the guests managed to buy almost all of the lots! A good musical mood was created by the band TaRuta from Kiev and the musicians, the group called Papa Carlo and Boris Sevastyanov from Kharkiv. The culmination of the evening was the waltz. It shows that the same goal unites!

We are grateful to all the partners. Without them this event would not be possible:

We collected a record amount of UAH 133.220. These funds were aimed at helping children, as well as the development of a social Internet platform Nebaiduzhi.

In part, we have already handed this aid to families at New Year’s Eve, which was organized to support children and give them some warmth and New Year comfort. Everyone received a gift during this holiday, and the representatives of the organization also came up with a surprise. As a surprise, our friend, a well-known Kharkiv musician, an artist and a poet Oleh Roy presented his authorial collections of poems to the children.

In late December, Oleksii Kurtsev, the President of the non-governmental organization All-Ukrainian Student Fraternity The Elite of the Nation, was elected the Chairman of the Public Council of the Kharkiv Regional State Administration, where he represents the interests of our organization.

Does it seem to be everything? Of course, it does not! There were many meetings with young people and students, as well as a meeting with Oleksandr Yarema, the Deputy Minister of Youth and Sport of Ukraine, many TV broadcasts, celebrations and memorable dates.

What’s next? Next there will be more! A number of projects are on now and will continue in 2018. Many ready projects are ready and waiting for the implementation. They will have even larger scale than last year.

2017 was a difficult and a rich year, but nevertheless it was so interesting! We grow, develop and work even more and more in order to make this world, this country, as well as Kharkiv region better every single day!